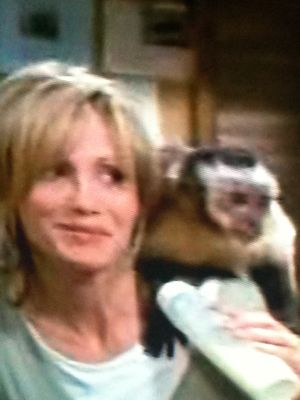 This entry was actually written on Aug. 31.

Came home from the office early this evening and took from my fridge the Teriyaki chicken I’ve had marinating since Sunday. Wanted to let it settle to room temperature before sticking it on the grill (little grilling tip for you right there). So I set it on the counter and figured I’d kill 20 minutes on the sofa. Well, seems I was asleep before Tony Kornheiser could say the ‘I’ in PTI. I was literally asleep 5 seconds after I laid down on that couch. Woke up two hours and fifteen minutes later. This being at work at 6 A.M. thing just ain't right.

Today’s Monkey of the Day comes from my co-worker Robin Confer who was fleet-fingered enough to snap a pic of her television. It’s our first Guest Monkey.

It’s funny. When you think of all the labels one can assign to Robin, My Co-Worker won’t crack the Top 100. Robin's accomplishments in soccer more or less put her in a different galaxy.

One of the things I was looking forward to at UGA was the chance to work with the staff of coaches who were staying on board, namely Steve Nugent - a friend from my earliest NAIA years, and Robin – one of the true legends of women’s college soccer.

Here’s the thing… Robin is very modest. If you didn’t know her list of accomplishments, she’d never be the one to tell you. But anyone who’s been in this game for a few years does know her. Or at least of her. Robin cannot escape her soccer fame.

There was a time when you could catch kick-off of an afternoon soccer match at UNC, see the Heels score a half-dozen goals and still be out of there in time to grab your dry cleaning and pick up the kids from school. Robin was one of the reasons your kids weren’t left standing on the curb.

Whenever Steve Holeman, Robin and I are introduced to a visitor on campus, Steve likes to joke that between us we have three national championships. Which is true. Robin has three rings while Steve and I… well, you can do the math. And if not for an unfortunate own-goal by a teammate, Steve might have had to amend his joke from ‘three national championships’ to ‘four.’

Just a quick review… my co-worker scored 77 goals as a four-year starter for UNC. As a senior she was the National Player of the Year (for those of you who may be new to this, think Heisman Trophy) and a First Team All-American. Her #7 jersey was retired by the Heels. She has represented the United States at the U-16, U-18, U-20 and full national team levels. She played professionally in the WUSA for Boston. You can see her in soccer videos. You can read about her in soccer books. You can probably find a poster of her on EBAY. And even now at the tender age of, oh, let’s just call it 29, when she laces ‘em up at our training sessions, she can still shred our entire team including her fellow coaches. Even in retirement she is perhaps the fittest person on our roster and just because she's got a few free minutes each week, she runs marathons. Let’s face it, the girl is Luh-Jit!

Okay, so Robin’s reputation as a soccer player precedes her. But that hardly defines her. She also happens to be a really warm-hearted, genuine person and someone I thoroughly enjoy seeing every day. And she’s really good at her job.

Working with Robin has put everything into a new perspective for me. To give you an example, today one of the girls came out for some extra training, mainly to work on her 1v1 moves, and Robin and I were there to help. So I’m telling the player about something I noticed about her dribbling from this past weekend’s games. Then after about 60 seconds of me rambling, the light bulb finally went on and I was like, “Why are you listening to me? Why am I even talking when we’ve got one of the best 1v1 players of all-time standing right here?” Next to Robin I have absolutely no street credit. So I left.

This summer Steve and I realized that working with Robin is great for balancing our egos. It began when UNC notified Robin that because of the amount of jerseys the program has retired, they needed to start recycling numbers and were taking her #7 out of retirement. Well Robin was happy to oblige UNC, but she wasn’t exactly thrilled that her number was being taken out of retirement. That inspired Steve and I to create a running list of things Robin can say but we can’t and never will. “They unretired my jersey” is at the top of that list.

“I only scored once for the U.S.” Yep. That’s on the list. Probably my favorite.

This summer during soccer camp the U.S. played its World Cup match against Ghana. Just before kick-off our coaching staff realized that in the hustle and bustle of a camp week, none of us had worn our national team jerseys to show our patriotism. We were all a little irritated with our own forgetfulness. Robin toyed with the idea of going home to get hers and Steve and I were thinking that maybe we should do the same. A second or two later we had our little Ah-Ha moment. Steve and I were talking about the national team jerseys that we bought at like Dick’s Sports. Robin was talking about her actual national team jersey. On the back of the shirts that Steve and I own, the nameplate reads “Donovan.” On the back of Robin’s jersey it says, “Confer.” These are the moments that remind us who’s really in charge around here.

Once Robin was telling me about a girl from another sport at another university who had won two national championships. I asked Robin if she made fun of her.

The really cool thing is that in the unlikely event that working with a legend starts to get a little bit lost on you, there’s always another story to be told. My new favorite came to light last week. Like most of Robin’s stories, this one just sorta started as an ill-timed hiccup then quickly snowballed until she had no choice but to see it through to the end.

It started out when I jokingly said that I would score nine goals in some fictitious game. Robin countered that she had once scored ten. And she immediately regretted saying it. But we pressed for details so she begrudgingly continued.

During her senior year of high school Robin was 10 goals shy of breaking the Florida state record for career goals. So on a day when her team was about to face a rather weak opponent, Robin’s coach asks her if she wants to just break the record that day.

Yeah. Just let that sink in for a second.

So… you only need ten goals. Why not get them all… In. This. One. Game.

Three hat-tricks. Plus one. No biggie.

That the coach even considered this a possibility should be enough absurdity to last a soccer lifetime. That Robin decided that she would go out and actually score ten times, well, that's the difference between fact and fiction. Fiction has to be believable.

If you don’t understand the preposterousness of even suggesting this, then I’m guessing you’re new to this sport. Asking someone to score 10 goals in a game is like asking a baseball player to hit seven home runs... in six at-bats. It’s patently absurd. Honestly, I don’t know that I’ve ever coached a player who even took ten shots in a game.

A high school game in Florida is 80 minutes long. A player would have to score a goal every 8 minutes to reach this feat. And keep in mind there are 21 other people on the field who, you know, also want the ball and at least 11 of them will try to take it from you.

Sure enough, Robin does as promised. She scores her 10 goals and breaks the record. She tries to cushion her achievement by reminding us that the other team was just really bad. “Everything I shot at the goal went in. It was ridiculous. We won 16-0.”

As Steve and I are processing this - the way you might process the morning after the night you spent in your hot tub with the aliens who had landed their spaceship in your backyard – a thought occurs to me. So I say, “Robin, isn’t there a ten-goal mercy rule in Florida?”

Here’s the thing. Robin was hesitant about telling this story in the first place because, like I said, she’s exceptionally modest. But it was one of those moments where your mouth gets out in front of your brain and before you know it, the horse has left the barn. Given the chance to do it over I was already certain that Robin would have never let this topic surface.

When I mentioned the mercy rule she about choked.

“Well… there is,” she said, realizing… accepting… lamenting that another horse was headed out the door.

“But you have to play the whole first half,” she said.

Silence as Steve and I put the pieces together in our heads.

Eyes shifting as we try to reconcile that what we think we heard is actually what was said.

“Wait a minute. You scored ten goals… IN THE FIRST HALF!?!”

Robin wishing she could vanish from that chair in my office and really looking forward to the end of this discussion.

“I told you they were REALLY BAD.”

“You scored a goal every four minutes???”

“You don’t understand how bad this team was.”

Yes, one more story that Steve and I can never tell. Ladies and gentleman… introducing my co-worker and one of the legends of college soccer… Robin Confer!