Today’s been kind of exciting. To summarize, Izzy scored a goal this morning and then sucked down a dozen steamed clams at dinner. So she’s just like me. Except for the part about scoring a goal.

Okay, it wasn’t Izzy’s first goal – she scored one while I was driving to Daytona a couple weeks back, but this is the first time that I got to see her score so that’s milestone territory as far as I’m concerned. And to be fair, she needed to score that fourth-quarter goal because my head was about to pop off from the first three quarters of what can only be described as a soccer tragedy.

I won’t coach youth soccer, mainly because I’m on the road too much. But even if schedule conflicts weren’t an issue, I still wouldn’t. Like a long list of other college coaches, I won’t coach youth soccer because of an acute aversion to parents who think that they were genetically blessed with more soccer knowledge than it took me 36 years to accumulate from playing, coaching and watching the game. Yeah, yeah – I know that most parents are great/wonderful/fantastic and they make the soccer world spin round. I completely agree. Thank God for them! But it only takes one whacko to ruin your week and I’ve been doing this for way too long to have someone who has never kicked a ball to tell me that our 8-year olds need to spend more time working on goal kicks/throw-ins/penalties. Oh don’t act like that doesn’t happen. So when it comes to Saturdays at the rec fields, I cast my lot as a soccer parent and not a soccer coach.

When it became clear that Izzy was going to join a soccer team, I thought about the type of soccer parent I would be. I figured I would just be the laid back guy, sippin’ coffee in my collapsible chair and not caring a thing about the result. I really don’t care how many games we win, I told myself. As long as Izzy has enough fun to want to come back the next time. That’s the parent I wanted to be. And to be fair, I still don’t care about the number of games we win – which is remarkably convenient since that number might not breach two. So it’s not so much that we’re losing; but it’s the COLOSSAL fashion by which we’re losing that has me slightly bent.

So today I sat in my collapsible chair, sippin’ my coffee, biting a hole in my lip and stewing in a pot of spring discontent as I watched the opponent run over us like a John Deere through a field of dandelions. The kid who missed practice was absolutely killin’ us, which was driving me mental on principle. Maybe if you came to practice you would know not to throw the ball across the face of our own goal. We have another kid who, every single time the ball rolls within leg’s reach of her, she reflexively toes it whichever way she’s facing. She never attempts to take a touch to control it. NEVER. It’s like watching whack-a-mole. She treats the ball like it’s a mouse attacking her feet and she simply repels it as quickly as possible. If the ball gets near her, it’s a one-touch toe banger. She has no concept of direction. Her navigational instincts are nonexistent. If she’s facing the sideline and the ball rolls between her and the sideline, she’s gonna toe it over the sideline. If she’s facing the endline, she’s toeing over the endline. If she’s facing our own goal, she’s toeing the ball at our own goal. For the life of me I can’t see how this kid gets any enjoyment out of the game whatsoever. She could have the same experience stepping on bugs.

But I could have tolerated all that if not for my own daughter whose enigmatic performance might best be entitled The Flight of the Hummingbird. Izzy was constantly near the ball. Near it. The problem was her lack of effort to actually engage it, as if the ball was surrounded by an invisible force field. A kid on the other team would get the ball and start to dribble and Izzy would run beside her, just hovering like a hummingbird at its feeder, never actually making any effort to you know, take the ball. She was basically a shadow. Or a really oversized Tinkerbell. And that’s the problem with having a genuinely sweet kid. She’ll fight like mad when she’s wrestling me on the living room floor, but when she’s on the soccer field against other girls? Yeah. Notsomuch. She just wanted to float around the field in her shiny uniform and do her best not to bother anyone. Meanwhile I’m sitting there asking myself why we’re even out here. Little did I know…

I didn’t think it was possible, but Beth managed to exacerbate my migraine when, as our team was setting up to take a goal kick, she aimed her camera at the field and then shouted to get Izzy’s attention. Here’s the thing about Izzy - she LOVES being in front of a camera like no three other people I’ve ever met. So of course she turned around, saw the camera, then smiled big and bright in the middle of the field so Mommy could take her picture. Just freaking fabulous.

Izzy is just like Beth and Beth is one of those truly sweet people who aren’t from New Jersey. When it comes to competition, she can take it or leave it. Maybe that makes her more evolved than me and if that’s the case, then great; I can live with being the knuckle-walker. But for Pete’s sake, you don’t ask your kid to pose during the middle of a game so you can take her picture! I mean even at the U-8 level there are still some modicums of competitive etiquette that absolutely must be observed. This whole thing had become one giant fiasco. I couldn’t sit idly by any more. I had to act.

So after the third quarter I pulled Izzy aside and told her that she needed to start actually trying to take the ball away from the players on the other team instead of chaperoning them to our goal. I didn’t yell. Didn’t raise my voice. Just explained my point as calmly as could be.

When you give an eight-year old advice, it’s pretty much a coin flip whether or not the point will hit its mark. But to my delighted surprise, Izzy played the fourth quarter with a degree of determination that could actually be termed as aggression. In the first 30 seconds she knocked a kid off the ball at midfield and dribbled in all by herself to score on an empty net (In 4v4 there are no goalkeepers). That goal sparked a huge fourth quarter rally where I think we scored six to their two, but I really have no idea. I couldn’t tell you the final score but I’m guessing we probably lost something like 9-8. But like I said, I really don’t care about the result. I was ambivalent to the score but I was ecstatic about Izzy’s fourth quarter revelation, so as soon as the game ended and she went through the handshake line, I called her back over to the sideline. I needed to give her some positive reinforcement. I wanted the revelation to stick.

This was a HUGE moment! My kid was discovering the miracle of physical aggression! She was on the fast track to being an impact player on this team. She was actually becoming a competitor!

You know what she said? 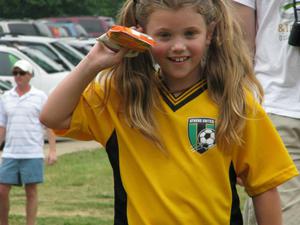