Three Things to Watch during the World Cup

Have you ever noticed how insanely different a World Cup game looks compared to one of your own? Yeah. Me too. There’s a lot to be learned from watching the world’s best. But what can we extract from these mega-elite talents that can be realistically applied to the development of our own players?

For a while now I’ve been thinking a lot about the most common technical deficiencies I see in our youth and college players. These things frustrate me and I tend to obsess over them because they are quite fixable. We just don’t spend enough time actually fixing them. Maybe that’s not fair. Maybe ‘fix’ isn’t the right word. Let me rephrase: We don’t spend enough time developing these things at the younger levels.

So with no further ado...

The most technically competent team I’ve coached was at the University of Georgia. We had a lot of high-level, technical players. We were one of the best teams in the nation when it came to possessing the ball. As a coach, there were times when it was a lot of fun to just watch.

I also enjoyed watching the English Premier League, and I found it impossible not to make comparisons between those teams and our own. I was always asking myself, what makes those players better than mine? What needs to happen for us to be more like them?

Do you know the most striking difference I found between our players at Georgia and those in the EPL? It wasn’t the size and speed. Okay, that was also impossible not to notice, but overall athleticism is relative to the league you are occupying, and our athleticism was just fine for Division I women’s soccer. I was looking for things that were transferable, things that I could affect, and genetics wasn’t among them.

It also wasn’t technical competence. Okay, there was a difference there as well. Look, I didn’t say the only difference, I said the most striking one. But again, technical ability is somewhat relative to the league you occupy. In the world of D1 women’s soccer, we were pretty competent from a technical standpoint.

For me, the most striking difference, the difference that leaped off the screen time after time after time, was the EPL players' ability to protect the ball. Maybe ability isn’t exactly the right word. Maybe willingness. Maybe instinct. Maybe intuitiveness. Whatever you want to call it, the professionals did it a heckuva lot better than my college players. It was pretty fascinating to realize how much better we could be at protecting the ball. We were nowhere close to our ceiling.

In 2018 I moved to a Division 3 program. Naturally it was impossible not to compare my new program to my old one. And you know what the most striking difference between the two programs was? That’s right. The players at Georgia were so much better at protecting the ball than the players at Widener. The math was pretty clear: The higher you travel up soccer’s pyramid, the better the players are at protecting the ball.

I want to be clear about this – I’m not talking about shielding. Or at least not entirely about shielding. When coaches hear shielding, they think of a player protecting the ball and holding her ground with an opponent draped on her back. That’s a piece of this to be sure, but it’s only a piece. Shielding commonly commences after a player has received the ball. What I’m talking about – that striking difference I mentioned earlier – is the reflexive way the professional player puts his body between the ball and the opponent before he even receives it. Or, short of that, how quickly his first touch puts the ball on the opposite side of his body from the pressuring opponent. And none of this is limited to balls that arrive on the ground. You'll see it when the ball is floated in, driven in, or haphazardly bouncing around. There's a constant battle to separate the pressuring opponent from the ball, and these guys do this with such ease and fluidity that it’s easy to miss. But it’s happening right in front of us constantly, and it's soooo worth paying attention to.

Think about a typical game for your team. How many tackles are successfully made in the middle third of the field? Not just by your team, but by both teams. I bet it's a pretty big number.

Now watch this World Cup and pay attention to how few successful tackles occur in the middle sixty yards of the field. I’m not saying there aren’t turnovers, because there are. I’m talking about tackles – when an attacker has the ball tackled off his foot by a single opponent. It’s rare. Very rare. Incredibly rare. Why? Because world-class players are so quick to protect the ball, and they are so good at using their body to put separation between the ball and the opponent.

At those highest levels, when possession is conceded in the middle sixty yards, it’s typically the result of an imprecise pass – one that either gets intercepted, or gets blown up upon receipt. If the attacking player has a half-decent chance of receiving the ball, he’s keeping it. That’s one reason there are so many fouls in the middle third. The defending player can’t find a way to the ball and ends up fouling the player in possession. I haven’t seen a study on this, but my guess is that in an elite level tournament such as the World Cup, there are more fouls than successful tackles in that expanse of the pitch.

Watch any game... Heck, watch ten minutes of any game, and count how many times you see the player on the ball get his body between the ball and pressure. It’s constant. It’s automatic. To the professional player, it’s as natural as breathing. And they do it with such fluidity and nonchalance, it goes practically unnoticed, which is a crying shame because it is so critically important.

We coaches dedicate substantial time to ball control and not nearly enough to ball protection. Mastery of the ball is great and it’s important and it’s the foundation for pretty much everything else, but there needs to be a dedicated emphasis on protecting it from the opponent who intends to take it.

The players I’ve observed suffer from two glaring misconceptions. First, they seem to think that you can’t protect the ball unless you are touching it. And that is a fundamental issue that we coaches must address. We need to teach our players that protecting the ball very often starts before you even receive it, and that you don’t have to crowd the ball to protect it. As a matter of fact, the closer you are to the ball, the closer you allow the opponent to be to the ball.

Body then ball. It’s that simple. And as someone who spends his weekends watching countless youth soccer games played by high school-aged players, I can assure you that we are doing a poor job of getting our players to embrace this concept.

The second misconception is that only the defending player should initiate physical contact. The fact of the matter is that oftentimes the situation requires the player about to receive the ball to find the opponent and initiate contact to seal off that opponent. Think of a target forward backing into the central defender as she’s about to receive a pass. That’s a pretty commonplace example, but there are many, many other times when the player about to receive the ball must initiate contact if she plans on protecting it. But let’s face it, how often do we teach that? How often do we prioritize it? Players must understand the necessity for initiating physical contact to first own the space, because… if you own the space, you own the ball. Body then ball.

I’ve come to believe that the protecting the ball should replace the inside-of-the-foot pass at the top of page one in the imaginary soccer development handbook. It’s led me to create the mantra: It takes more than one of them to take the ball from one of us. In other words, one of my players must be able to protect the ball from a single opponent. If she is given a half-decent chance to collect the ball, she cannot concede possession. She has to be able to hold it long enough to solve the problem and deliver the ball somewhere productive.

Players must take responsibility for protecting the ball from a single opponent, escaping pressure and finding the next move. Without this, the team cannot be successful. If the individual players can’t keep the ball, neither can the team. As you watch this World Cup, pay attention to how quick each player is to get his body between the ball and the pressuring opponent. Notice how often they set up to protect the ball while it’s still in transit. Or, if they receive it under no pressure, how they will move to protect it when pressure draws near. Then think about what it looks like on the team you coach.

At this level, the individual players don’t give the ball away cheaply very often, and that’s because somewhere along the line in their development they embraced the idea of body then ball. That’s one big reason they live at the top of the pyramid.

If you want to protect the ball, step one is owning the space between the ball and the opponent. If you own the space, you own the ball. Say it with me: Body then ball.

These guys do it incredibly well. It’s worth noticing.

While you're here, check out my book Soccer iQ. It makes a great stocking stuffer :) 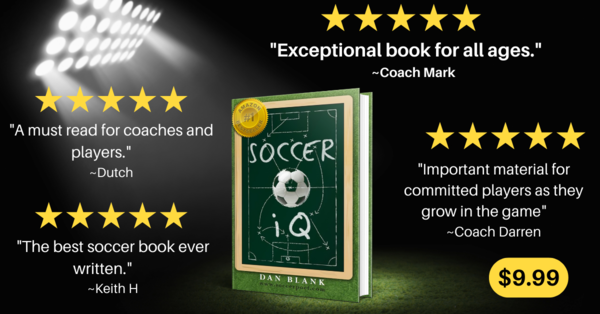