Creating a Culture of Kickass in Female Athletes 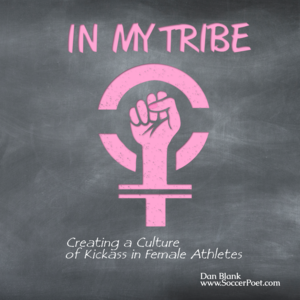 In this riveting follow-up to the runaway best-seller Everything Your Coach Never Told You Because You're a Girl, Coach Dan Blank takes aim at the warm and fuzzy double-standard facing those who coach female athletes, and reveals the philosophies and methods that sparked a culture of unapologetic competitiveness in a women’s college soccer team that won more games than it was ever supposed to win.

In My Tribe is written specifically for coaches looking to develop a competitive culture within their teams, and recounts the author's experience coaching a group of rebellious over-achievers who became notorious for their commitment to extinguishing the spirit of their opponents.

In My Tribe details Coach Blank’s unconventional approach to culture-building, from selecting captains and indoctrinating rookies, to aggression, accountability and self-governance. This book also includes a Tools of the Tribe section – specific exercises that helped to build a culture where teammates were ferociously loyal, where everyone was accountable, and where winning was the only acceptable outcome.

Written in Blank’s familiar, pull-no-punches style, In My Tribe speaks directly to coaches who strive to build a competitive culture that teaches girls to win, win big, and to never, ever apologize for it.