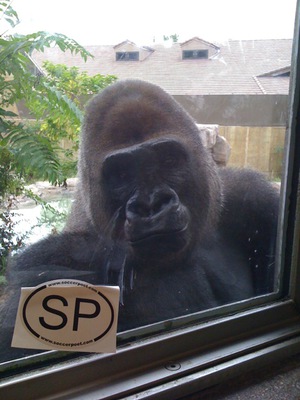 No one is quite sure how the Monkey of the Day came to be.  Tall tales abound about its origin.  Theories are too numerous to mention.  Some of the townsfolk up on Baker Hill even claim to know the guy who knows the guy who first discovered the daily monkey.  But I suspect that it's all pretty much urban, or perhaps rural, legend.  Still, it came from somewhere.  That much we know for sure.  Somewhere out there that fella sleeps under a blanket of stars, dreamin' of critters.

The Monkey of the Day (MOD) theory was explained to me in 2007 and I wasn't ready to believe it. Truth be told, I thought it was a load of hogwash.  Well, as it turns out, I was absolutely wrong. Since learning of the MOD, I have been amazed at how prevalent monkeys are in our lives.  They are there every day, often hiding in plain sight.

The Monkey of the Day (MOD) is the fascinating premise that, if you are paying attention, each and every day you will come in contact in some way, shape or form with a monkey or some derivative or variation of said monkey. It doesn’t have to be a live monkey, mind you. As a matter of fact, if you’re seeing one of those every day then you’re playing above the rim. The MOD can be a picture of a monkey, ape, gorilla, chimpanzee, etc. on a billboard. It can be the word ‘monkey’ (or ape, gorilla, etc.) in a newspaper, book or magazine. It could come from a song such as Brass Monkey or Shock the Monkey or Daydream Believer by… you guessed it, the Monkees. It could be a stuffed animal or an inflatable pool toy or a pair of monkey pajamas. It could be someone on the television referencing any qualifying primate. Heck, your best friend might just mention that he’s had more fun than a barrel of monkeys. It all counts. And I guarantee that if you stay switched on, each day a monkey will cross your path.

Don’t believe me? Give it an honest one week trial and see how it goes. But you’ve got to remind yourself to stay alert for the first few days. Use those opposable thumbs to write yourself a note.  Soon it will become a habit. And you'll live a much more fulfilling life.

As for me, now I’m A Believer (get it?). And when the opportunity presents itself, I will post my Monkey of the Day pic here. I invite you to do the same. Your MOD testimonials are also welcome. Like this example from Frank in Battle Creek, Michigan:

Dear Mr. Poet-
Since reading about your monkee (sic) of the day theory last week, me, my wife and kids have all been on the lookout for the little fellers. And by golly we’ve seen at least one every day. Now we can hardly wait to get out of bed to go critter spottin. The monkey of the day has brought our family closer together. Keep up the good work.
Frank

Here’s one from Stephanie in Lake Wales, FL:

Dear SP-
Today my teacher said we were driving her ape. Does that count?
Stephanie


Want to be famous?  Send in your monkey sightings to mod@soccerpoet.com.