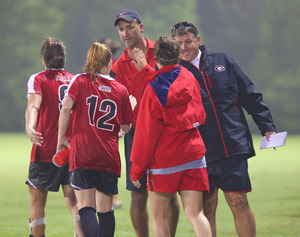 Sorry it’s been a little bit quiet here lately. It’s just that things have been, well, a little bit quiet. Not too much going on in the soccer world at the moment, which means we start to focus on all those other things we never seem to have the time to get to.

Friday I had one of those days when I wish there’d been a camera crew following me around to give an inside look at the world of college coaching. Actually, there’d be no need for a crew. One exceptionally bored guy with a camera sitting across from my desk could have captured all the action.

I remember seeing an interview with a soldier talking about war movies. He said that for war movies to be realistic they should be six hours long and no one would do anything until the fight scene in the final 30 seconds. His point was that soldiering involves a lot of sitting around and waiting. I can relate.

I’ve said this before but realistically, only 20% of my work day actually involves coaching. That percentage is much higher during preseason and lower in the spring. So let me tell you about Friday… a ten hour day with not one sniff of soccer.

Got into the office at 7 A.M. and put on the coffee. My first order of business was to continue the research phase of renovating the Turner Center. We’re getting new carpeting, furniture and graphics. Somehow this project landed in my lap and I am now the decision maker. Of course I’m a natural choice for the assignment. After all, it’s my extensive background in interior design that led me to a career in coaching. So that’s why I have a pile of carpet tiles sitting outside of my door and several three-ring binders of swatches stacked on my desk. My grand hope is to create something that will have visitors saying WOW when they walk in our building. But I’ll be quietly satisfied if no one whispers comparisons to the set of Sanford and Son.

I set off to returning emails for bids on this and samples on that and this was a reoccurring theme throughout the day. Well, that and pricing sofas and end tables and paint jobs.

What else ate up a ten-hour work day? Projects. That’s what coaches do – projects. And never one at a time. I had at least five other projects open, everything from revising the letterhead of our email to planning a recruiting trip to Vegas to learning some under-utilized features of our recruiting software to figuring out how to run our camp website. All of it takes time and none of it can be done from start to finish in a single sitting. You can only take it so far before you have to wait on a return phone call or email. That’s when you’ve reached a dead end. Then you dive back into one of the other projects in queue and the process starts over.

The excitement of the day came from a text I received from one of our administrators: “Congrats on the new job but we’ll miss you.”

I wrote back: Is there something I need to know???

Normally a text like that will put a coach into a mad scramble. Sometimes, when it’s your time to go, you feel like the last one to know. And sometimes you legitimately are. For example, a friend of mine was the head coach at a small college in Florida and had no plans of changing that. Then one of his buddies called to see where he was going. Why? Because he had seen our friend’s job advertised in the NCAA News. The school never bothered to tell the coach. Nice, right? Those are the moments that keep you on your toes.

But of course I knew that this particular text message wasn’t actually intended for me. It was for Nooj.

In case you hadn’t heard, last week Nooj was named the Head Coach at UNC-G. Yes, we are all very happy for the Noojer. He’s paid his dues and this is a chance he’s clearly earned. Still, it was one of those situations where, for Steve and I, our humanity outweighed our self-interest… but just slightly.

Let’s go back to last March…

I’m still an assistant at Ole Miss. I’m looking for a table outside the lunch tent at the Vegas College Showcase and end up sitting with Nooj and a couple other coaches. I’ve known Nooj since 1993 and we share that bond of rising up through the ranks of the NAIA before landing in the SEC. We’ve both paid our dues so there is a mutual level of respect about that. Nooj had been an assistant for two years at UGA and he is telling us about the finishing touches he just put on the ‘man cave’ in the basement of his house in Athens; touches that included a projection TV and a cigar room. These are not signs of someone planning to skip town any time soon. Nooj had put down roots. Big, thick ones.  After three years his life in Athens is finally settled. Except of course for the baby that is on the way in October.

Five days later I’m back at my desk in Oxford, MS. Steve comes into my office to tell me that the Georgia job has opened up. The coach has resigned one of the best jobs in the country to spend more time with his family. We sit around saying “Holy cow!’ for a few minutes and later that day Steve decides to throw his name in the hat.

Two weeks later UGA names Steve as its next Head Coach and Steve asks me to go along and I’m happy to accept. Now there’s a math problem. By NCAA rules, a soccer program is only allowed two paid assistants. Nooj and Robin are already in place and doing darn fine jobs. But Steve can’t take me and keep both of them. Well, at least not on the payroll. He decides to keep Robin. And me? Well, I just took my friend’s job. Lovely.

I was genuinely sick about the bitter in my bittersweet. I tried telling myself the old, “Ah, that’s life,” - but I just wasn’t buying it. Then a spark of light. Steve called with the news that Nooj would stay on as our volunteer assistant. I was tickled that Nooj was staying on board, but I was absolutely dreading the moment I showed up in Athens and took over my friend’s office. There’s really just no good way to do that.

The one thing I just couldn’t shake was that Nooj was completely a victim in this mess. He hadn’t done a thing wrong. He was a good guy and a good coach and then one afternoon *POOF* - his job wasn’t there anymore. An inordinate amount of circumstances had conspired against him for no reason whatsoever and I hated it for him and I didn’t like it much more for me.

So I decided to reach out with a phone call. That way if I threw up, no one would be there to see it. I had that phone in my hand for half an hour trying to figure out just what in the world I was going to say. I mean there’s awkward, and then there’s this thing.

Finally I dialed the numbers and Nooj picked up. I apologized. I don’t remember how exactly, but I apologized. Nooj was a total gentleman. He said, “You know what, Dan, it’s disappointing, but that’s life.” Then Nooj began doing what I’ve come to learn is his signature move – he began helping me. He was telling me where I should live and how he was going to introduce me to all types of friends and how he would show me around Athens. It was like nothing had ever happened. The damn guy seemed happier than me.

When he had every right to be bitter, Nooj never was. Not in the beginning. Not at the end. And not anytime in between. He went out of his way to make me feel at home. Up in New Jersey, when a man’s response to adversity is admirable, we say he’s a stand-up guy. Okay, most of the time that means the guy did his prison time without snitching, but it’s got other applications, too. And this was one of them. Nooj was without question a stand-up guy.

Nooj was constantly busy, constantly in motion. He was always doing three things at once in addition to whatever phone call he was inevtiably taking. The guy never took a break. And the thing was, it seemed like everything he was doing he was doing for someone else. A lot of it was for our players. Some of it was for friends. Some of it was for his Team Boca alums - some that he hadn't coached in a decade. I was learning that when those who knew Nooj needed something, Nooj was their first call. He accepted every plea, looked forward to them even, and juggled them all from good morning to good night. I once asked myself how the guy ever found time to sleep. He was always doing, and always for others.

In the begining I didn’t know what we would get from our new volunteer. I mean, when the paycheck goes away, the desire to work ain’t often far behind. But Nooj surpassed all expectations – by eons. I’m not going to tell you all the work Nooj did for us because quite frankly, it’s impossible. 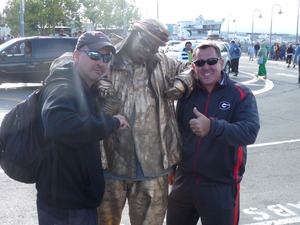 But I will bet you all the money in my pocket right now that there’s not another volunteer in the country that had his workload. His job description never changed. He continued to do all the work he had done under the last coach. He kept the same long hours as everyone else. He travelled on every away trip, even when his wife, Jana, was coming dangerously close to her due date. Nooj was completely invested in the program. Mainly because Nooj was completely invested in our players. And ultimately, when you come to understand Nooj, that’s the conclusion you can’t help but draw.

Some coaches are in it for the wins. Some are in it for career advancement – for ego or for the theater of it all. But some - the very best ones - remember why they should be in it… for the players. And Nooj’s every day was consumed by giving our players the very best possible college soccer experience he could help to provide. He bent over backwards for our team and oh yeah, in the process, just happened to turn in one heckuva performance as our goalkeepers coach. And that’s why it was a little bit difficult not to be selfish when Nooj made UNC-G’s short-list of candidates. Yes, we all wanted the man to get the job he wanted. And yes we wanted Nooj to actually get paid for all his work. It would be silly not to want these things for him. But still… we were just hoping that maybe he could leave a clone behind in his place. Is that too much to ask?

When I arrived in Athens I considered Nooj a friend. Now as he leaves I consider him a dear friend. And as I observed how he carried himself through all of the muck that life had thrown on him, I decided that when the day comes that I’m in those shoes, I will do my best to respond with the same grace and class. It won’t be easy, but I couldn’t have asked for a better example of how to stand up and carry on. Nooj will do great at Greensboro. Those kids are lucky to have him.